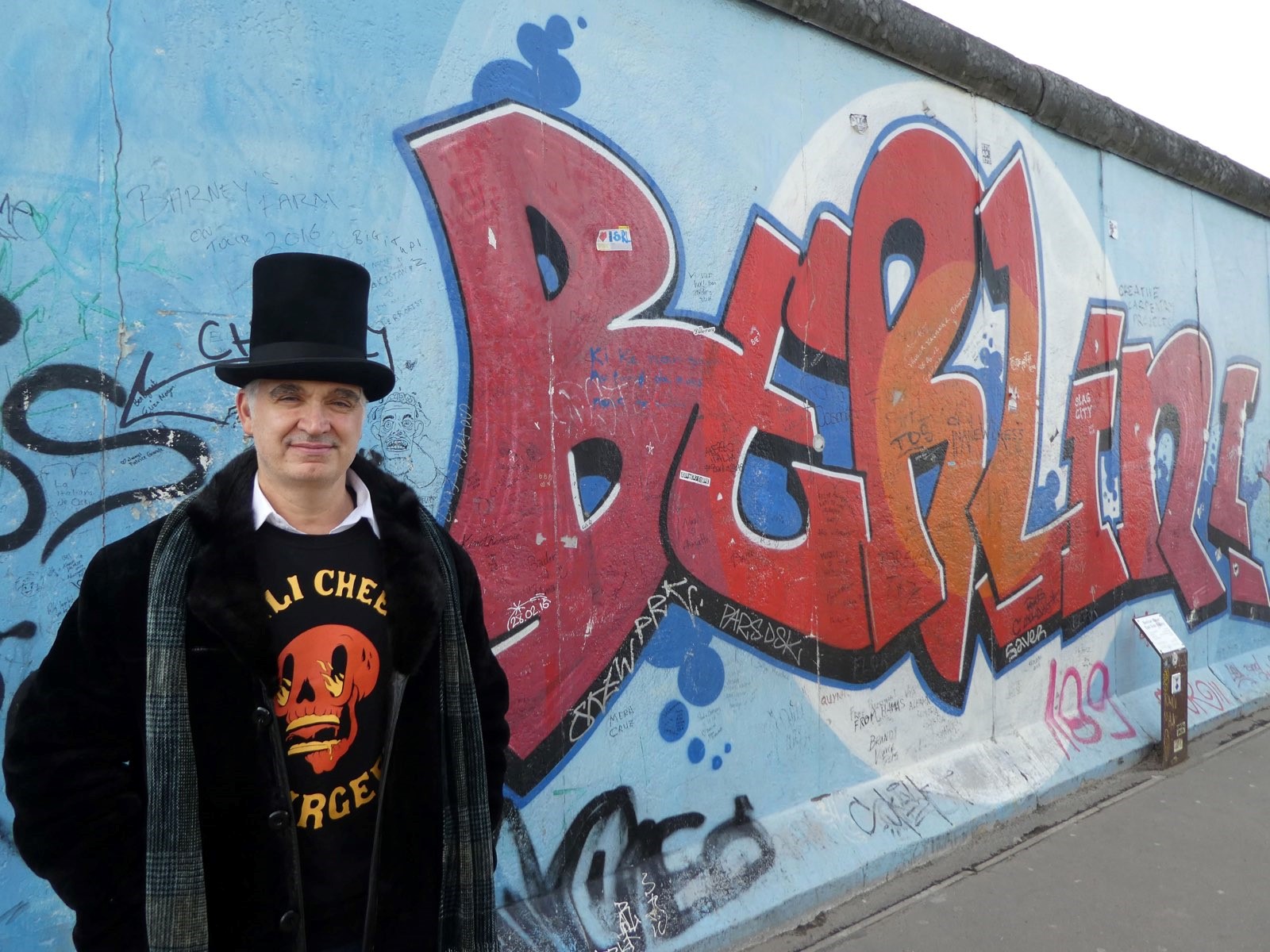 An Interview with Kevin Berlin

Livingstone Projects Berlin Livingstone gallery hosts a new project space and artist residency in the city of Berlin. For periods of 2-4 months artists work at the studio to create a presentation in cooperation with curator Jeroen Dijkstra. Kevin Berlin was the first artist in residence for 2017.

Baronesse Louise Von Duesterlohe: Was this the first time you were in Berlin?

Kevin Berlin: Actually, I’ve only been to Berlin twice before and for very brief visits. I knew I had to come back someday as the whole city has my name on it. It’s a surreal experience to discover everywhere you turn, is your name. As a matter of fact, on my first visit, I was attending the Art Berlin art fair and I discovered that the Mayor of Berlin was in attendance.

KB: Yes, and I was eager to meet him and came up to his entourage and politely introduced myself. “Hi, I am Mr. Berlin.” The immediate response was an aggressive call for security. Upon closer inspection, it was understood that in fact, I was Mr. Berlin and had no ill intentions and it was an honour to pose together for a number of photographs with the Bürgermeister who said with great warmth and pride, “Mr. Berlin, welcome to your city.”

BLVD: BERLIN IN BERLIN seems to be a lot about walls and streets.

KB: When I first got to the city, of course being “Mr. Berlin,” I was very interested in the famous wall of my namesake. I was very attracted to the addition of graffiti at the Berliner Mauer East Side Gallery.

BLVD: In 1990, when the Wall came down, the government asked 105 artists to paint a mural, but over a twenty-year period, that mural was damaged. The artists were invited to come back and fix the damage, but it was soon graffittied again. . .

KB: Yes and because those murals were unprotected, there were many additions that were made by the public to the artworks. Some were made in the dark of night, most considered as graffiti, which is at some level criminal in nature. In sum: a real collaboration. Spontaneous, out of control and very honest, heartfelt voices. Ai Weiwei, perhaps the most famous artist living in Berlin is well known for declaring all art is political. Historically, whether it be in China or another coun- try, when a place that was closed for a long time and then is suddenly opened, is often a recipe for great art. To me the Berlin Wall paintings are the most powerful art that I experienced in Berlin. It is very unlikely that in a gallery setting you can recreate the sensation of oppression, mass murder, revolution, or liberation. Perhaps, most intriguing in my first few days in Berlin, I discovered that the streets had many things in common with the wall.

BLVD: You have a long history of painting street finds and incorporating other found ob- jects in your work; Jagermeister, Marlboro, Berliner Luft, Feigling, even Nutella.

KB: Yes, the street, like the wall, is constantly changing and everyone who throws out a beer bottle or a coffee cup or a cigarette butt, unknowingly becomes an artist. Anyone who spits, vomits or urinates or on the other side sweeps or cleans a street is an artist. And there is no place on the street that is not in constant change and like the wall, a collaboration of many artists.

KB: About twelve years ago, I was on a family holiday in Marrakech, Morocco. I took a detour on a side street by the famous bazaar. There was an artisan working literally on the street, using bits of old automobile tires, wood stain, nails and wood, making art frames. Not only did I find something marvelous about these very inexpensive wonders, but upon closer examination, the structure of the frame was actually made well enough that you could put in an artwork and properly secure a piece of glass. I bought them all.

BLVD: How did they end up in Berlin?

KB: All those years, they remained in their original suitcase, directly from the airport, in a closet, in a 500-year-old palazzo in Florence, Italy. When I got invited by Livingstone Gallery, to come to Berlin, I immediately thought of these frames and brought the whole suit- case with me, as an extra bag. Each work on paper was hand cut and matched to a specific frame. Created with the idea that it would be stronger in the frame than on its own.

BLVD: BERLIN IN BERLIN appears to present work in almost every medium, why not just choose one?

KB: The goal is to get your message expressed, medium is secondary. When I was a kid, I used to love a quote by Degas, “good painting is done with as much knavery, trickery, and deceit as the perpetration of a crime.” Question is: is your artwork like stealing an apple, or murdering your lover? Whether it’s painting, works on paper, video, photography or installation, I choose the medium to fit the crime.

BLVD: So is this show some kind of confession?

KB: Well, I can’t tell you what you think about Berlin and I don’t want to. Nothing is more dull to the modern audience than a polemic. As soon as you start telling people what to think, they usually stop listening. I find the best art has a limited role and that is to ask a question, but not to answer it. I can tell you what I saw and how I felt.

BLVD: Do you think the Berlin art scene lives up to its reputation?

KB: As of mid-May this year, large sections of the famous wall are being sandblasted and painted white to usher in yet another new Berlin. This new Berlin is covered with enormousfor sale signs referring to your big chance to buy a “luxury loft.” I am reminded of the time when I used to live in SoHo in NYC in the 90’s, and something similar happened. Successful lawyers and bankers moved into the uber cool artist neighbourhoods and the artists got priced out and moved away. I’m not sure how the Berlin art scene can keep up.

BLVD: Can you describe your work with one word or one idea?

KB: If there is one thing. Just one theme I would take away from my time in Berlin is that the city is ever in flux. I heard that in 1945, at the end of the second war, 60% of the city was flat. Nothing there. The other 40% was totally destroyed. In essence, almost every- thing that you see today in Berlin is entirely new. Of course, at first impression, many of the prewar buildings, elements of everyday life are still there but most are the result of careful restoration and recreation of what was lost. Everything else is new. The city for me, in its current state, is a fluid and extraordinary juxtaposition of old and new. Some specimens in the geological stone collection in the Natural History Museum (Museum für Naturkunde) have been around since the Big Bang. The bust of Nefertiti in the Neues Museum has been an essential part of the city’s identity since it arrived at the beginning of this century. The new dome of the Reichstag building reflects some of the worlds most exciting recent architecture. The T-Rex in the Natural History Museum just arrived from Montana last year.

BLVD: The population is also in transition.

KB: For a New Yorker, Berlin, at first impression seems empty for such a large metropolis. It seems somewhat flat, wide and barren. I was shocked to learn that in 1939 the city had about four million inhabitants. Today it seems under-filled with lots of room for growth. Of the more than three million people who live in Berlin today, I understand that in the last twenty years, at least two million left, and have been replaced by two million arrivals. So in a sense, both the city and the people are entirely new.

BLVD: Were there other elements that impacted your work.

KB: Yes, many. A visit to KZ Sachsenhausen (concentration camp), the 220 kilo replica of the Titanic at the Rausch Chocolate House, Kitty Cheng’s Bar, SoHo House, Check Point Charlie, and my favourite coffee shops Einstein and Balzak. Oh, and of course the ubiquitous cobblestones. I particularly liked three books I read while in Berlin. One takes place just before the war, Going To The Dogs (The Story of A Moralist) by Erich Kästner. And the second just after, The Wall Jumper by Peter Schneider. The third reminds me that history tends to repeat itself, the 600 page The Rise and Fall of Ancient Egypt by Toby Wilkinson.

KB: All of my work comes from the tradition of narrative painting. As in the Renaissance; works that tell a story. I develop my ideas from extensive sketches, observation and note taking. I use diaries, cameras, video footage, memory, and any other method I have access to get a feeling for the place. In many ways, for BERLIN IN BERLIN, I wanted to paint a portrait of the city. You shouldn’t need to have a PhD to look at a painting. I hope to communicate with everyone regardless of their age or cultural or intellectual background. Sometimes a cigar is just a cigar.