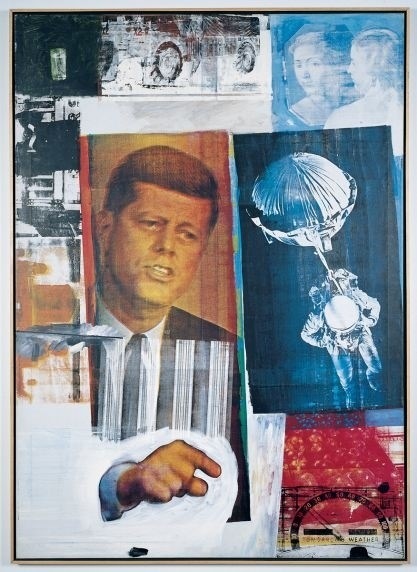 Tate Modern currently presents a landmark exhibition of Robert Rauchenberg, "the artist who changed American art forever", in collaboration with The Museum of Modern Art, New York. On view until 2 April 2017. Works by Rauschenberg will be included in our upcoming group show Specail Collaborations International, opening 15 January 2017.

Press Release:
Robert Rauschenberg blazed a new trail for art in the second half of the twentieth century.

This landmark exhibition celebrates his extraordinary six-decade career, taking you on a dazzling adventure through modern art in the company of a truly remarkable artist.

From paintings including flashing lights to a stuffed angora goat, Rauschenberg’s appetite for incorporating things he found in the streets of New York knew no limits. Pop art silkscreen paintings of Kennedy sit alongside 1000 gallons of bentonite mud bubbling to its own rhythm. Rauschenberg even made a drawing which was sent to the moon.

Each room captures a different moment of this rich journey, from Rauschenberg’s early response to abstract expressionism to his final works saturated in images and colour. Seen together they show how Rauschenberg rethought the possibilities for art in our time.

This exhibition, organised in collaboration with The Museum of Modern Art, New York, is the first full-scale retrospective since the artist’s death in 2008 and the ultimate Rauschenberg experience. It is your one chance to see these major international loans together in one place, while discovering the full story of an inspirational and much-loved artist whose influence is still felt today.

Exhibition organised by Tate Modern and The Museum of Modern Art, New York