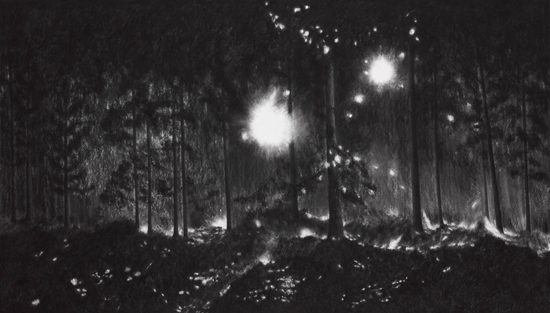 Auschwitz, Lampedusa and Aleppo… these places are seared into our collective consciousness. History has also left its mark in art. For Anselm Kiefer, all of Germany as a landscape is contaminated. The exhibition includes his work Bilder-Streit. Using his characteristic materials such as linoleum, oil paints, sand and jute, he expresses his need for a new German identity. Where Kiefer depicts a quest, Sophie Ristelhueber literally records the traces of conflict. Her work Fait portrays the almost serene remains of the first Gulf War in Kuwait.Burdened landscapes also play a role in new art forms, as the rapper M.I.A. demonstrates in Borders. In this video clip, desperate refugees try to climb a high fence. Sometimes the depicted landscape appears to be innocent and it is history that gives it meaning. With the title Road to Auschwitz, Hannah Collins attributes a sinister significance to what appears to be a quiet country road.The exhibition Loaded landscape: from Kiefer to Ristelhueber shows how artists can transform the traces of war and conflict into a metaphor for humanity.